Alexander the Great, son of Zeus-Ammon

A number of factors have made my expedition the success that it has been this far, and will no doubt remain: the skill of you, my army, the loyalty of my officers, the phalanx and sarissa and, of course, the Pella Wine Tent.

Of these factors, I am clear in my mind that the presence of the PWT has been key to the overthrow of Darius III’s wicked empire. An Athenian would dispute this, saying that it simply makes us drink sodden degenerates, but it is upon stupid antics and the tales that are told of them afterwards that men thrive.

With that in mind, I am pleased to welcome the new manager of the PWT, Amyntas of Vergina. He is the twelfth of his line (so’s to speak) to bear that proud name so I am sure you will have no problem remembering it.

The manager of the PWT is, quite literally, a law unto himself. However, if Amyntas wishes to do what his predecessor did not, and survive to the end of his term of office I have the following friendly advice:

1. Do not raise wine prices without telling the king
2. Do not even joke about banning fights
3. Do not give any suggestion What So Ever that you thought Attalus, father of Cleopatra hard done by

I assure you all that I have no other reason than Amyntas’ well-being for giving the above advice. I had nothing to do with his predecessor’s unfortunate demise, which occurred after he accidentally ran into a sword eighteen times after doing the above three things.

What’s Making Elektra Mad This Week?
Now that she can’t be mad at her mother anymore, we look at what will be making Elektra mad in the week ahead.

News From Macedon
Please bear in mind that it takes three months for messengers to get to Persepolis from Macedon so if your family has been sold into slavery they are likely dead already.

Seven whole days recently passed during which time Queen Olympias and Antipater did not argue with each other once. Seasoned political observers described the peace as “wholly unnatural” to the point where some offered to betray either the Queen Mother or Regent in a manner of their choosing so that they could claim to be offended and start a new, comforting feud.

Cambyses’ Army [see Glossary on this Web blog – AOS] has been sighted sailing up and down the Rhenos River in Germania threatening local tribes. Emissaries from this region have asked Antipater to call him home before he ’causes himself a mischief’ (translation from the Germanic).

The death toll in the silver mines in the month of Thargelion was 356 – 15% down on Munychion. Mine commander, Amyntas of the Mines, said on the fifth day of Skirophorion, “We practice a hard and not necessarily fair system of work here so to lose fewer slaves in a month would be nice except that, of course, they are slaves, so who cares?”.

Aristotle of Stageira has reacted “with great sadness” at his failure to proceed to the finals of the inter-polis Rome: Total War Bastard competition. “This uncouth game punishes players who think about what they are doing rather just rush senselessly into battle.” he told this reporter before going off to drown his sorrows at a Symposium. 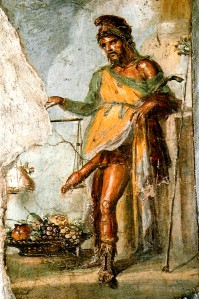 The League of Amazing Eunuchs
The LAE would like to confirm that it does not intend to make Priapus it’s patron-god. Whoever started spreading this rumour is very vile.
– Limp Amyntas (epistates on the day this notice was written)

Friends of Rome Society (I)
We will be eating wolf at our next meeting on the hemera Areos during which our “consul” Amyntas Superbus will give a talk on The Rise of the Praetorship: classes in conflict. Please note, all wine is diluted at our meetings in accordance with the Roman fashion.
– Amyntas Africanus

Friends of Rome Society (II)
Please come to our meeting. Just because we dilute our wine does not mean we are soft. Look at this way – you can drink more before getting drunk! Please come, it’s getting boring with just Amyntas Africanus and me.
– Amyntas Superbus

The Wine Sarissa Club
A general discussion on different types of dagger will be held over wine and meat on the hemera Dios this coming week. Do you prefer a smooth blade or a serrated one? When you push it in do you withdraw it straight away or twist it? Which part of the body is easiest to cut? All these questions and more will be answered before we get outrageously and probably lethally drunk. A practical demonstration of best dagger practice will be conducted depending on the capture of any Persians beforehand.
– Straight Edge Amyntas

The Society of Anyone Not Called Amyntas
As to who this society is for, I think the name of the group explains it pretty clearly. And as for what we do – we celebrate the life of anyone not called Amyntas. This week (on the hemera Dios) we are looking at the life and work of Pisistratos, the famous tyrant of Athens. His name is not even an anagram of Amyntas.
– Ironic Amyntas
— Only joking, Ptolemy son of Amyntas (don’t rub it in)

Face of our Fathers 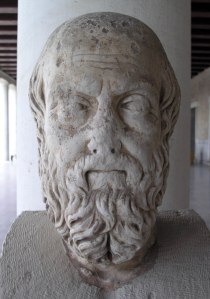 Herodotus, not so much a badass as baldass

1. Drinking wine and sex do not together

Patrons, do not believe anyone who tells you otherwise. A good prostitute wants you in her, not your puke, when the inevitable happens while you kiss. You might say that she should not care given that you have paid to be with her, but consider: if you are content to put not just your manhood but pukey fluid in her then you should pay double for the privilege.

Now we understand one another.

Wise Words
“Are we out of Caria yet?”
(Herodotus as a young child )