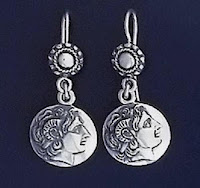 Last night, those of us lucky enough to be in the Pella Wine Tent witnessed some first rate speed drinking, vomiting and death during the latest Inter-Macedon drinking competition.

Unsurprisingly, following the opening all-against-all round, the final was contested between the men of Eordaea and Orestis, with the former coming out on top. Upper Macedon really will never be rivalled for the brutality of its life and culture and the ability of its men to survive drinking innumerable kraters of wine in a limited amount of time.

Upper Macedon’s continued dominance in the competition is no shame to Lower Macedonians, for without us our mountain brothers would still be using bark to wipe their bums, as the saying goes. Yes, Upper Macedon has the strength, but Lower Macedon has the cunning; divided, we were both at danger from the northern tribes and Greek poleis; together – thanks to my father – we are unbeatable across the world.

You might ask where was Lower Macedon’s cunning last night. Before answering that, I would like to thank my fellow Bottiaeans for volunteering to take charge of the dining arrangements for the Thracian drinkers at next week’s Pan-Greece drinking final.

Thrace has a reputation for backwardness that is even stronger than Upper Macedon’s but with it comes a reputation for being even more formidable drinkers. They deserve every honour they get, especially other Greeks helping them with their preparations to defend their crown.

Therefore, I am delighted that men from my own region are looking after them so that the Thracians can be on their best form when they compete against Eordaea.

Now, what was I saying again?

Alexander
Further to the above, my condolences go to the friends and families of those men who died during the competition last night. They died, if not nobly, then for a more-or-less good cause.
***

Demaratus, Macedon’s biggest cry baby, talks about what makes him teary
1. Soil
“When I hold a clump of black soil I think of all the plants that will grow in it and my heart explodes with pride! Food means life, life means fit men, and fit mean means soldiers for Alexander! Oh, how wonderful his army is to see I— I must— oh![Interview paused while Demaratus tries unsuccessfully to hold back his tears]

“Forgive me; at least they were tears of joy, though! Unlike when I see dusty, brown soil; then I know that the ground is dead. DEAD! Woe is me! it’s all too much!”

Next Week: Demaratus cries over turnips

The Ironic Erinys
on Greek literature 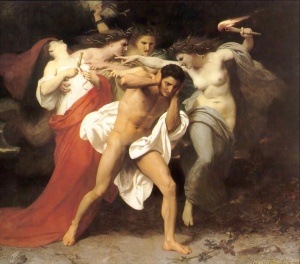 “Come on Orestes, we only want to play”

“When we chased Orestes, I didn’t mean him any harm; I just wanted to tickle him.”
“Sophocles treated King Creon far too harshly; poor lamb.”
“I was really sad when Agamemnon got angry with Calchas.”
“Frankly, the reason we never chased Elektra is because she scared us.”
“That Sappho was a right moody cow.”

The Mobile Library
Ptolemy Lagides would like to advise users of the library that fines for the late return of scrolls cannot be paid in kind; nor will attempts to haggle be entertained.

The Wine Sarissa Club will be holding a symposium on the ‘detrimental health effects of drinking diluted wine‘ this coming hemera heliou. Diluted wine will be offered as part of the session although members are reminded that they drink it at their own risk (to their reputation).

Engineering and the Chicken
This coming hemera selenes Aristobulos will be building a model of a silver mine out of fruit, meat and beer while discussing the economic benefits that the mines bring to Macedon. After the talk, his pet chicken will be eating the mine. Guests are permitted to stay and watch the chicken if they please but are asked not to get in its way.

Proxenus will be giving a talk on the next hemera Areos on how he and his team erect Alexander’s Royal Tent ‘quickly, safely, and securely’. This talk will take place in the Aegae Wine Tent; afterwards, a practical demonstration will take place outside which all non-drunk attendees will be invited to take part in.

Thirty Seconds to Persia will be demonstrating different war cries from across the known world this hemera Hermu in the Pella Wine Tent.

Coin & Kind Society
As you will recall, Alexander established a new mint in Babylon during his stay there. But how are coins made? This hemera Diosin the PWT  we welcome a member of the Babylonian mint to Persepolis to speak to us about the money making process. During the talk, coins bearing the image of Zeus basileus (Ba’al) made in Babylon will be handed out – and handed back at the end of the talk, on pain of death.

Pork Chop Soc
The PCS will be meeting next hemera Aphrodites in the ruins of Xerxes’ Palace to discuss the following topic ‘Should Philip II have turned back from Thermopylae in his thirteenth regnal year?‘ Wine and food will be served.

Did You Know?
Thucydides once called the Macedonian army a mob that was liable to panic? How times change! 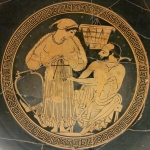 Dear Lady Aphr etc etc,
I visited a new prostitute this week and she charged me the full rate for intercrural sex. Do you agree that this is unfair?
Yours, Unsatisfied.
Dear Unsatisfied,
Yes, it is unfair. Do not complain to her, though, as you would not wish to rub her up the wrong way with your annoyed ejaculations. Rather, go and speak to her mistress afterwards. She will be certain to satisfy you so that there are no more thighs and lows between you and your mistress.
Yours Lady A. etc.
Camp Notices
Editor: Eumenes of Cardia
Deputy Editor: Leonnatus Son of Anteas
Wise Words
“If you add a little to a little, and then do it again, soon that little shall be much.”