Welcome back to this series of posts on Oliver Stone’s film. It’s been a couple of weeks since I wrote the last post so it was both a challenge and a pleasure to pick up from where I left off.
.
In the last post, I mentioned that the elder Ptolemy (Anthony Hopkins) states that during their hunt for Bessus, the Macedonians got completely lost, and I expressed scepticism that this really happened. Well, I was reading Robin Lane Fox’s account of the search the other day and sure enough he does not mention that the Macedonians got lost despite their difficult ascent and descent of the Hindu Kush. I found out from Arrian, though, that there was an occasion when it happened. I should have remembered it, too, because it was a very famous one; namely, as Alexander and his Companions were on the way to Siwa. Then, they were saved either by snakes (Ptolemy) or crows (Aristobulos). Perhaps we might say that having omitted Siwa from his film, Oliver Stone decided – albeit in a limited way – to allude to it later on.
.
Scenes Covered 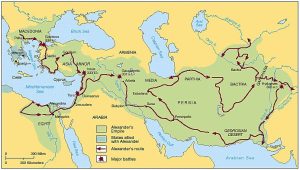 In reality, Alexander sent a man named Polydamas not to Babylon but Ecbatana (modern day Hamadan, Iran) where Parmenion was then residing. You can see Ecbatana on the map above just under Media. Thanks to his guides and their camels, Polydamas arrived in Ecbatana after eleven days of no doubt hard riding over desert and waste land*. Upon his arrival, Polydamas gave Alexander’s written orders to the relevant generals and it was they who assassinated Parmenion.
.
* This reduced the travelling time from three weeks
.
Bagoas kisses Alexander / Parmenion’s Assassination
The final scene that we’ll cover in this post juxtaposes Alexander and Bagoas in bed together with Parmenion’s death in Antigonus’ arms. On the face of it, this scene is all about the contrast between  positive and negative themes; for example, love / hate, personal / public, and faithfulness / betrayal.
.
I would take the view, however, that the primary meaning of the scene is not to be found in the juxtapositions that it offers but the theme of degeneration that both the bedroom and Ecbatana scene reveal.
.
Parmenion should never have been assassinated. There was no evidence linking Philotas to the plot against Alexander. Parmenion may have opposed Alexander at Gaugamela and in Sogdia but he is never represented as being tempted by treachery. His death is really an act of judicial murder.
.
As a eunuch, Bagoas represents a sexual tradition that the ancient Greeks found effete and distasteful. For Alexander to take him into his bed, therefore, is for him to associate himself with that tradition and represent, in terms of the film, another step in the degeneration of his character. Many people will watch Bagoas kiss Alexander and think what a sweet moment it is; in actual fact, it is a profoundly sad one for the door out of that bedroom leads into the chamber where Alexander will kill Black Cleitus in a drunken rage.
.
Oliver Stone uses a number of metaphors to show Alexander’s decline. They range from simple things like the length of his hair, to his sex life, to his drinking and so forth. He doesn’t use Hephaestion. The intimacy of their relationship is only ever hinted at. In this, Stone is faithful to what we know from the historical record. I wonder, though, if the reason why he doesn’t show Alexander and Hephaestion together is because he wanted to keep the relationship in a sense ‘pure’. Bear in mind that sexual relationships between two grown men were also disapproved of in Greece, perhaps Stone didn’t want to distract attention from the fact that they were so close by sexualising the affair. We criticise him for not showing Alexander and Hephaestion together when in actual fact Stone was doing his best to uphold them all along. It’s just a thought.
.
Read the index of posts in this series here