The index of posts in this series can be read here
.
Read the introduction to this series here 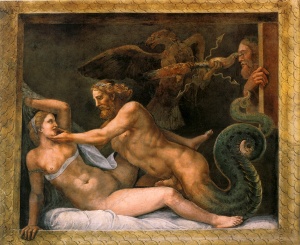 In the last chapter, I wondered aloud if Olympias told her handmaid that Zeus had had sex with her because she wanted Philip II to be angry and fearful of her. This would only make sense if she had a reason for wanting his enmity. But what could that reason be? Before we look at a possibility, let us look at proof that Olympias did not speak accidentally to her handmaid. She wanted Philip to turn against her; I am sure of this because at the end of 357 BC, P. sent this report back to Athens,

… [text missing] came to my rooms. Pale. Weak. [He said] King Philip ordered me to look into his bed chamber. I remembered Gyges and Candaules. I looked. Olympias lay upon her bed. Naked. A snake was curled round her thigh. Its tail rested upon her [pubic] hair. Its head rested upon her breast. [Philip said] She is a witch. Look at what I have to suffer. Look. He w[a]s drunk.

Plutarch states that Olympias may have belonged to a snake worshipping Dionysian religion and that,

‘Look at what I have to suffer’. These words indicate not only Philip’s upset but the fact that Olympias was pursuing a policy of upsetting him as much as possible without being openly disloyal. Judging by Plutarch’s description of her religion, she had chosen the perfect vehicle to do this. But, again, why was Olympias making such an effort to anger and distress her husband? At the same time as she was sleeping with her snakes, B. was writing,

I witnessed another fight in the market place today – once again between Macedonians and a group of Epirotians. The Macedonians were complaining that there are too many Epirotians in Pella today; that they upset their wives and children; that they cast spells upon both friends and enemies; that they want to seize the throne for Epirus [my emphasis].

Did the fights in Pella just happen or were they orchestrated? The Macedonians clearly thought there was more to them than just the violence. If they were orchestrated, perhaps Olympias’ religious ‘devotion’ was simply a ruse to destabilise her husband so that he was  a shadow of his former self; a softening up exercise such as the street fighters were engaged in. It seems incredible that Olympias might have been plotting against Philip at such an early stage but one day, murder did – in the eyes of many – enter her mind, for she has been plausibly accused of orchestrating Pausanias’ murder of the king.