A Letter to Arrian (14) The Dangers of Indiscipline and Drink 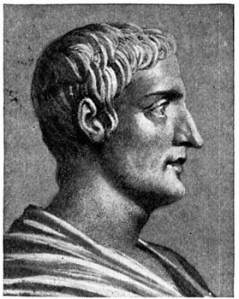 My dear Arrian,
.
Recently, I was thinking about the role of spies in ancient Greece. The example I had in mind was of the Athenian embassy to Attalus after Philip II’s death. However, they were not spies, and whether they gathered intelligence when they went to see him is, in truth, a matter of conjecture. I was very interested to see, therefore, that when Alexander ordered his Companions to conclude peace talks, he also ordered them to,

… gather information about Scythia – its geographical peculiarities, the customs of its people, their numbers and military equipment.

Proper intelligence gathering!
.
As you write, Alexander wanted to know about the Scythians because he intended to invade their country. With that in mind, he decided to build another city – Alexandria the Furthest* – on the banks of the Tanais River. His plans were interrupted by a revolt that spread across several native cities. It had no sooner been put down than Asian Scythians appeared on the other side of the river. Alexander wanted to attack them but Aristander told him that the ‘omens portended danger’. I am impressed that Aristander would not change his prophecy to suit the king; it must have taken great courage for him to do that.
.
Now, I must acknowledge that the Roman, Curtius, says the exact opposite to you. I prefer your more sober reporting, though. Speaking of the Romans, however, Pharnuches’ retreat from Spitamenes’ cavalry in a square formation reminded me of Mark Antony’s withdrawal from Parthia in like fashion during the consulship of Lucius Gellius Publicola and Marcus Cocceius Nerva**.
.
It is a great shame that Pharnuches and the officers who accompanied him were not so brave as Aristander. My heart fell as I read of the disorder that they allowed the detachment to fall into, and the officers’ refusal to take over leadership of the force. Many men died as a result of their fear and worry. Having said that, surely Alexander would not have blamed them for their defeat? It only came about, after all, because Spitamenes received the unexpected help of the Nomad Scythians.
.
We now come to two very ugly incidents – the mutilation of Bessus, and murder of Black Cleitus. In the former, Alexander acted like an eastern king. In the latter, drink caused Cleitus to speak out, and drink caused Alexander to kill his friend.
.
I agree with you that Bessus was treated with ‘excessive severity’ but I am a little confused by your suggestion that Alexander put his murder of Cleitus down to the wrath of Zeus and that he took responsibility for what he had done. I do not see how these statements can be reconciled. Having said that, I commend you for your questioning of Anaxarchus. If he really did argue that whatever the king does is always right then he was a deeply cynical and dangerous man. I hope that Alexander did not listen to him, but rather, let his shame lead to repentance.
.
Your friend,
.
φιλέλλην

The above picture is from Ancient History
.
An index of all the letters can be found here
.
* modern Khujand in Tajikistan
** 36 BC