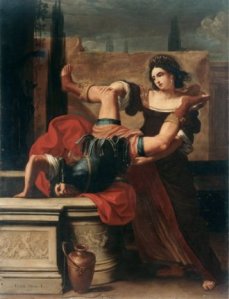 In the first blog post in this series we looked at how Perdiccas single handedly invaded Thebes in 335 BC, and it is to that city that we now return.
.
Perdiccas’ one-man invasion was quickly followed up by Alexander and the Macedonian army. Plutarch reports that the Thebans ‘fought with a superhuman courage and spirit’ but were ultimately defeated.
.
Once the fighting was over, Alexander allowed the city to be sacked. He was determined to make an example of Thebes so as to dissuade other Greek cities from rising up against him.
.
As the Macedonians set about stripping Thebes of her valuables, a group of Thracian soldiers serving in Alexander’s army broke into the home of a noblewoman named Timocleia. The leader of the party gave her home to his men, and took Timocleia for himself. He raped her.
.
Now, while it would be true to say that even wicked men are capable of showing mercy, the Thracian captain showed by his actions on this day that the quality of his was low to non-existent. Having forced himself upon Timocleia he demanded to know whether she had hidden any of her gold or silver.
.
Given what had just happened to her, Timocleia could have been forgiven for telling the captain everything in order to get him and his men out of her house. Instead, she responded with great cunning.
.
Thus, she did not give way but led the way and – while her home was still being looted and her children menaced – Timocleia took the captain to a well. When you stormed the city, she told him, I threw everything down there.
.
The captain approached the well and peered into its depths to see if she was telling the truth. He would soon have a much closer view, for as he looked, Timocleia approached him from behind and with an almighty shove, threw him into the well.
.
We don’t know what the relative size of the Thracian captain and Timocleia was but given that men are generally bigger than women, and the fact that she would have lost a great deal of strength in trying to resist his assault, Timocleia must have been forced to use all her energy to make sure the captain went over.
.
All her energy? Not quite. Having succeeded in trapping the captain, Timocleia then proceeded to stone him to death with rocks lying about the garden.
.
Too late to save their leader, the Thracian soldiers realised what had happened. Interestingly, they did not kill Timocleia on the spot, but bound and led her away to Alexander for judgement. Despite what the captain had done, they must have thought that he would punish her. I fear this tells us something rather depressing about how rape was regarded as a legitimate tool of oppression in antiquity.
.
As for Timocleia, was she acting on adrenaline when she killed the Thracian captain? i.e. not on her real strength. Maybe, but as I doubt that she would have been presented to Alexander until at least a little time after the assault had taken place, I am inclined to say that she was able to do what she did out of true toughness. 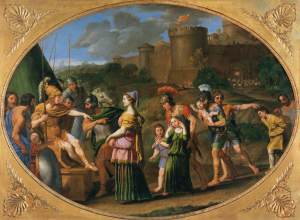 I say this because Plutarch says that when Alexander met her, he found her in a calm state of mind and with a ‘fearless bearing’. That fearlessness led Timocleia to stand up to the enemy king with great pride. Instead of begging for mercy, she proudly told him her name and the fact that her brother had fought against him at the Battle of Chaeronea.
.
There were two ways to Alexander’s heart. One was to be called Hephaestion. The other was to fight bravely against him. Or, as in Timocleia’s case, in defence of oneself. Plutarch says that he was ‘filled with admiration’ for her defiant words and the way she had revenged herself upon the Thracian captain, and ordered the release of her and her children.
.
What Timocleia went through should not be suffered by anyone but it also secured her future. After Thebes was plundered and razed, Alexander ordered the population to be sold into slavery. Plutarch notes that a few people were spared this fate but does not include the nobility as a class in their number. Had the Thracian soldiers not come to her home that day, Timocleia might have been separated from her children and forced into a very cruel form of service for the rest of her days. Fate may be serrated but she also cuts both ways.
.
Rating of Hard 10/10
Pro Timocleia acted with great strength, intelligence and nobility in the serve of her honour
Against Unless we say that two wrongs don’t make a right I don’t think Timocleia put a foot wrong. I reject the ‘two-wrongs’ argument because we are talking about acts of hardness in this post not morally good ones

5 thoughts on “Timocleia of Thebes’ Revenge”