Following in Alexander’s footsteps thanks to Google Maps! 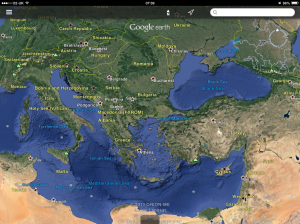 Alexander advanced with his army to the Hellespont and transported it from Europe to Asia. He personally sailed with sixty fighting ships to the Troad, where he flung his spear from the ship and fixed it in the ground, and then leapt ashore himself the first of the Macedonians, signifying that he received Asia from the gods as a spear-won prize.
(Diodorus XVII. 17) 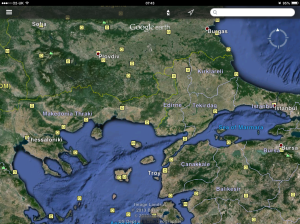 Troy on the east coast of Asia Minor (Turkey)

[Alexander] travelled inland to Troy and offered sacrifice to Athena, patron goddess of the city; here he made a gift of his armour to the temple, and took in exchange, from where they hung on the temple walls, some weapons which were still preserved from the Trojan war. These are supposed to have been carried before him by his bodyguard when he went into battle.
(Arrian I. 11) 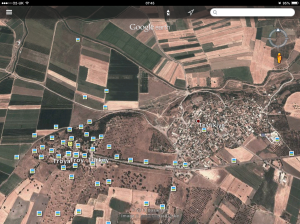 Troy is a ruin today but, as you can see, it is still popular with photographers

He is also said to have offered sacrifice to Priam on the altar of Zeus Herceius, to avert his anger against the family of Neoptolemus, whose blood still ran in his own veins.

At Troy his sailing master, Menoetius, crowned him with gold, as did Chares the Athenian, who came from Sigeium with a number of others, either Greeks or natives.

One account says that Hephaestion laid a wreath on  the tomb of Patroclus; another that Alexander laid one on the tomb of Achilles, calling him a lucky man, in that he had Homer to proclaim his deeds and preserve his memory.
(Arrian I. 11 – 12) 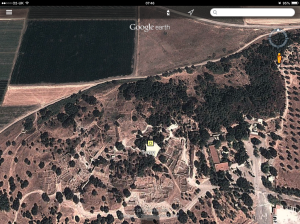 Troy, the city that fell for a woman’s beauty

Once arrived in Asia, [Alexander] went up to Troy, sacrificed to Athena and poured libations to the heroes of the Greek army. He smeared himself with oil and ran a race naked with his companions, as the custom is, and then crowned with a wreath the column which marks the grave of Achilles; he also remarked that Achilles was happy in having found a faithful friend while he lived and a great poet to sing of his deeds after his death.

While he was walking about the city and looking at its ancient remains, somebody asked him whether he wished to see the lyre which had once belonged to Alexander [Paris] of Troy. He answered that he cared nothing for that lyre but asked for the lyre which Achilles played when he sang of the glorious deeds of brave men.
(Plutarch, Life of Alexander, 15)

3 thoughts on “Alexander’s Visit to Troy”