A Letter to Arrian (22) The King’s Nature 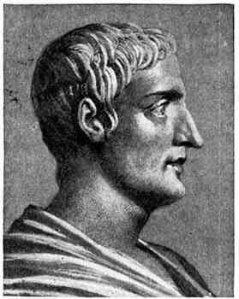 I start this letter on the third day of Alexander’s journey down the Hydaspes River. I don’t suppose it is really a laughing matter but I could not help but smile when I read how, whenever the opportunity arose, he stopped to make war on the native tribes. It is a wonder Alexander ever made it to the end of the Hydaspes let alone to Babylon!
.
The real reason for my smile, though, is because the king’s actions reminded me of an anecdote I once read concerning my favourite author (apart from you), J. R. R. Tolkien. He went on a walk with his friend C. S. Lewis. Whereas Lewis liked to keep a good pace, however, Tolkien was equally fond of stopping at every opportunity to examine the local flora. He loved his flowers and trees as much as Alexander loved to fight. If I listen carefully, maybe I can hear CSL’s and the Macedonian soldiers sighs still echoing upon the breeze*!
.
On the fifth day of their journey, the Macedonian fleet reached the fast flowing junction of the Hydaspes and Acesines rivers. You state that the clashing water made ‘such an appalling shindy that the men at the oars stopped rowing in sheer panic’. Leaving aside your translator’s use of the very old-fashioned word ‘shindy’, this passage convinces me that we are never closer and yet further away from the ancient mind as in the encounter with natural phenomena.
.
Close because 1900 years after your time we still do not full understand Nature in all her manifestations, and what we do not understand we will always find easy to fear. Far because what they feared was simply a noisy river; the Macedonians knew it was coming and – after all – these men had been through the fiercest battles. How could a river so affect them?! The answer lies, I think, in the fact that their worldview was radically different to ours.
.
If I may, I would now like to leave the Hydaspes and Acesines behind and focus on three occurrences that took place during Alexander’s Mallian campaign, all of which which tell me something very unsatisfactory about his character (at this time?).

As much as I love Alexander I cannot help but regard these as irresponsible actions for that they put him in needless danger. It would be tempting to suggest that Alexander had a death wish, perhaps born of anger after having to turn back for home, but I don’t think this is correct. He wanted glory – to achieve something that would, as you say a little further on, ‘live on the lips of men’. With this mindset, I imagine that from Alexander’s point-of-view bravery and foolhardiness were one in the pursuit of glory.
.
My friend, it has been good writing to you. I look forward to continuing your narrative.

The above picture is from Ancient History

An index of all the letters can be found here

* Dear Reader, I would be doing you an injustice if I did not add that it has been a long time since I read this anecdote. While I am certain I have got the essentials of it correct, please forgive me if I have got any details wrong. Feel free to leave a correction in the comments box.