Many thanks to @AliceMartha for her permission to publish these photographs of T E Lawrence’s clothing and camera, which she took on a recent trip to the Ashmolean Museum in Oxford.

Feisal asked me if I would wear Arab clothes like his own while in the camp… I agreed at once, very gladly; for army uniform was abominable when camel-riding …
(T E Lawrence, quoted on Wikipedia)

Another reason why Lawrence wore arabic dress is because it enabled him to fit in better with his hosts. As soon as I saw TEL’s clothing I thought of how Alexander adopted certain forms of Persian dress in order, not so much to ‘fit in’ with his subjects, but to fit them in to his new order. For the plan to work, though, it had to be accepted by the Macedonians. Unfortunately, that acceptance never came. 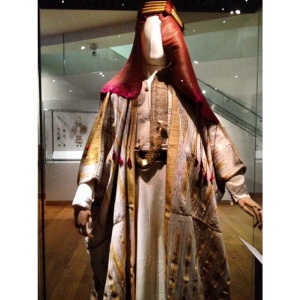 T E Lawrence was a good photographer. As I recall, he owned several in his lifetime – the first being given to him by his father, who was also a keen snapper. Perhaps slightly tangentially, seeing the camera below put me in mind of some of the unsung heroes of Alexander’s army, namely, his surveyors; the men who gathered the knowledge of the new lands they were exploring during the thirteen or so years of Alexander’s expedition.

Lawrence said that the happiest years of his life were spent on the archaeological dig at Carchemish in northern Syria (carried out between 1912-14) under Leonard Woolley. One can only wonder how Alexander’s surveyors looked back on their days of exploration. I hope it was with wonder.

By the way – I recently discovered that D G Hogarth, Woolley’s successor at Carchemish, also wrote a biography of Alexander and Philip II. I found the book while looking for another in the library (it’s nice when that happens). If I can find it again, I will certainly give it a read.