The City of the Mallians

The Story
Chapter 98
Diodorus makes no mention of what happened to the fleet immediately after its escape from the deadly eddies of the Indus River; presumably, Alexander ordered the surviving ships to be repaired while he continued his journey by land; alternatively, he might have waited for the repairs to be completed before continuing on foot with the ships sailing alongside him.

Unfortunately, Diodorus doesn’t give any clue as to which was indeed the case, opening the chapter with ‘[n]ext Alexander undertook a campaign against the Sydracae and the people known as Mallians’.

Up till Alexander’s arrival, the Sydracae and Mallians had been fighting each other. Seeing a common enemy approach, however, they patched up their differences and joined forces.

The joint army numbered ‘eighty thousand infantry, ten thousand cavalry, and seven hundred chariots’. Undoubtedly, a mighty force. But the two tribes also had mighty egos and ‘fell into a dispute’ over who should command the army. Unable to agree, they retired to their cities.

Whether delighted or disappointed by the army’s dispersal, Alexander came to ‘the first city’. Judging by what happened next and with reference to the other Alexander historians, this was the city of the Mallians. Diodorus simply refers to the inhabitants as Indians, though, so I shall follow him in that practice.

Alexander wanted to ‘take [the city] by storm’, but one of his seers – a man named Demophon – warned that if he did so, he would put himself in ‘great danger’. Demophon ‘begged Alexander’ to leave the city be ‘for the present’ but the king’s blood was hot. Not only did he ignore the warning but publicly ‘scolded’ Demophon for ‘dampening the enthusiasm of the soldiers’.

Demophon was dismissed and the siege got underway. Presently, a postern gate was broken open. Alexander led his men into the city. Many Indians were killed. Those who survived fled to the city’s citadel.

Diodorus now states that while the Macedonians fought ‘along the wall. Alexander seized a ladder, leaned it against the walls of the citadel’ and climbed up it.

Too scared to fight him mano-a-mano, the Indians ‘flung javelins and shot arrows at him’ instead. Their blows (upon his shield) made Alexander stagger. Where were his men? They were making ready to follow him. Two ladders were placed against the wall. The soldiers ‘swarmed up in a mass’. Suddenly – disaster. There were too many, and the ladders broke under their weight.

Chapter 99
Alexander was on top of the wall, alone. He could have climbed back down to rejoin his men, but that was not his way. His way was to fight. So, he leapt into the…

… citadel? No, apparently he jumped into ‘the city’. Did Diodorus forget he had just written that Alexander climbed the citadel wall a few lines ago? Perhaps. Or maybe the reference to Alexander climbing the citadel wall is a mistake and that after pursuing the Indians to the citadel he returned to the city walls. Although, why he would feel the need to go back outside and climb the wall to re-enter the city is beyond me. I think Alexander jumped into the citadel and Diodorus has been a bit lazy checking his text. As he says ‘city’ though, I will follow him in this.

Therefore, after jumping down into ‘the city’, Alexander found himself surrounded by Indians. Diodorus says he was ‘undismayed’ by their attack. I suspect that is only the beginning of the Macedonian king’s emotions, most of which were probably along the lines of ‘This is fantastic! A chance to win GLORY!’

During the fight, Alexander made use of a tree on his right-hand side and the city wall on his left to give him extra protection.

The Indians drew closer and closer; Alexander sustained ‘many blows upon the helmet [and] not a few upon the shield’. But he was determined to ‘make this, if it were the last feat of his life, a supremely glorious one’.

The fight continued until – inevitably – an Indian arrow hit its target. Alexander ‘was struck… below the breast’. The wound caused him to falter. The archer who had shot him ran up to deliver the coup de grâce. His hubris was the death of him. Alexander lunged his sword into the Indian’s side. Using a branch, the king hauled himself to his feet to continue the fight. Despite his injury and the pain he must have been in, Alexander ‘defied the Indians to come forward and fight’.

On the other side of the city wall, a third ladder had been found and was now flung against the wall. Peucestes (more commonly called Peucestas), the man who had carried the sacred shield into battle ever since Alexander took it from Troy, climbed up first.

Leaping down into the city, Peucestes covered Alexander with his shield. More Macedonians now followed. The Indians took fright and withdrew.

The Macedonians took the city ‘by storm. In a fury at the injury to their king, [they] killed all whom they met and filled the city with corpses’.

Alexander was seriously injured. So much so that a rumour went round the Greek settlements in Bactria and Sogdiana that he had died. The settlers had never really wanted to live in these wild and unfriendly places and so packed their bags to begin the long journey home. They never made it, being ‘massacred by the Macedonians after Alexander’s death’.

Comments
Hands up anyone who thought of the Greeks when they read about the Sydracae and Mallians falling out over who should command the army! That was certainly my first reaction.

Why did Alexander publicly admonish Demophon? What was so important about the city that he simply had to attack it? I wonder if it wasn’t just a matter of pride – something that Alexander was feeling a lot of after his humiliating climb down on the Hydaspes River.

I think the image of Alexander, an arrow sticking out of his chest, shouting at the Indians to to fight him is one of my most favourite from the whole of Diodorus’ book. The whole episode – how he climbed up the wall first, jumped into the citadel/city and kept fighting says everything that needs to be said about Alexander as a general.

The south-west wall of Multan’s citadel.

Did Alexander jump down here? 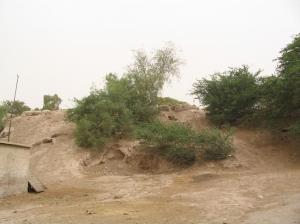 Only Diodorus knows, and he ain’t telling