Death of a Friend

The Story
Chapter 109
In the summer of 324 B.C., the Olympic Games were held at Olympia, and Alexander had it announced there that all Greek exiles ‘except those who had been charged with sacrilege or murder’ could return home.

Perhaps at the same time, he also released ten thousand of his oldest soldiers from service, and, upon learning that many were in debt, paid their creditors out of the royal treasury.

Diodorus mentioned in the last chapter (yesterday’s post here) how the Macedonian army became ‘frequently unruly when called into an assembly’.

One day, the men harangued the king again. This time, he responded in kind. Leaping down from the platform, Alexander ‘seized the ring-leaders of the tumult with his own hands, and handed them over to his attendants for punishment’.

Unsurprisingly, this increased the tension between the king and his army. But rather than conciliate, Alexander simply appointed Persians to ‘positions of responsibility’. This cut the Macedonians to the quick and they begged Alexander to forgive them. He did but not quickly or easily.

Chapter 110
We enter a new year. During it, ‘Alexander secured replacements from the Persians equal to the number of these soldiers whom he had released’. 1,000 of the new recruits were assigned to the bodyguard at court.

This year, too, Peucestes arrived out of the east (After and/or as a result of (?) saving Alexander’s life at the Mallian city – read here – he had been made satrap of Persia) with 20,000 ‘Persian bowmen and slingers’. These were integrated into the army.

By 324, there were now ‘sons of the Macedonians born of captive women’. How many? Diodorus says about 10,000. This figure is appearing a little too often for my liking. Anyway, Alexander set aside sufficient money so that the children could be given ‘an upbringing proper for freeborn children’. This included a suitable education.

Alexander now left Susa. Crossing the Tigris river, he came to a village called Carae. From there, ‘he marched through Sittacenê until he arrived at a city (?) called Sambana. After resting for a week there, he set out for ‘the Celones’ reaching them three days later.

It is not clear to me what exactly the Celones is – a group of settlements? A region? Neither Diodorus nor the Footnotes make it clear. What is clear is that Alexander met a people descended from Boeotians who had been deported there by Xerxes I. Despite never having been back to Greece, they had ‘not forgotten their ancestral customs’ still keeping Greek as one of their languages and continuing ‘Greek practices’.

After spending several days in the Celones, Alexander set off once more. His purpose now was ‘sight-seeing’ and he left ‘the main road’ so that he could enter Bagistanê, a country ‘covered with fruit trees and rich in everything which makes for good living’.

Next on the itinerary was a land of wild horses. In days of old, Diodorus says, 160,000 horses grazed here. In 324 B.C., however, they only numbered 60,000. I wonder if, as he looked out on the horses, Alexander thought about Bucephalus. I expect so.

Alexander stayed amidst the horses for thirty days. Finally, however, it was time to leave. And now, he came to Ecbatana in Media. Citing unnamed sources, Diodorus gives Ecbatana’s ‘circuit’ as being 250 stades. As the capital of Media, its storehouses were ‘filled with great wealth’. But was there also something else there, something rather less pleasant to the king? Namely, Parmenion’s tomb. If it was, I wonder if he acknowledged it.

Alexander remained in Ecbatana ‘for some time’. While there, he held ‘a dramatic festival’ and ‘constant drinking parties’. During the course of one of these, Hephaestion took ill; not long later, he died.

Diodorus describes Alexander as being ‘intensely grieved’ by his friend’s death. I don’t think you will read a bigger understatement than that this month let alone today. Presently, however, he recovered enough to order Perdiccas – Hephaestion’s replacement as chiliarch – to transport Hephaestion’s remains to Babylon where Alexander intended to ‘celebrate a magnificent funeral for him’.

Comments
Diodorus states that the Macedonian soldiers who were in debt owed ‘little short of ten thousand talents’. That’s on average, one talent each. The Footnotes refer to Curtius’ ‘astonishment’ at this figure, and I have to share it. I can’t believe that during the course of the expedition they would have had the opportunity to spend so much money.

The Footnotes also state that the mutiny described in Chapter 109 is the Opis Mutiny ‘continued from chap. 108’ although the way it is described there, it is as if Diodorus is talking about the Macedonian army’s behaviour in general rather than a mutiny that took place in a specific place and on a particular date. (Note also that Diodorus has the mutiny take place in Susa rather than Opis).

It seems rather surprising that Alexander is able to bring his men to heel by doing something that on the face of it should disillusion them further. I can only imagine that the Macedonians did not look at the matter as a case of ‘they are taking our jobs, we want them back’ but as ‘this race is usurping ours in the king’s affections; we must show him we love him in order to win him back to our side’.

The ‘main road’ to which Diodorus refers is – according to the Footnotes – the main Baghdad-Hamadan route which connects Mesopotamia to Iran.

The Footnotes also confirm the name of the horse country – Nysa (from Arrian). Can we say that it is an indication of Alexander’s love of horses that he stayed so long there?

If Didorus is to be believed, Hephaestion died a Macedonian’s death – as a result drinking too much. I am sure, though, that the alcohol simply weakened his resistance to whatever illness did kill him. Otherwise, I must resist the temptation to complain about the brevity with which Diodorus treats the death of such an important figure. 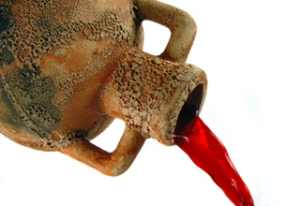 (Except Black Cleitus. Still not polite to mention him)

16 thoughts on “Death of a Friend”