The Man Who Conquered A Land That Wasn’t There 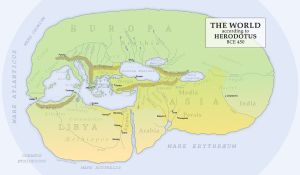 The world as Herodotus knew it.

For anyone who doesn’t know – and until I came across the blog a few days ago, I’m afraid I didn’t – the Washington Capitals are an ice hockey team in the American National Hockey League. According to Wikipedia, Ovechkin is one of their ‘star players’.

The reason I mention RMNB is because of an article it has lately published, titled Here’s Alex Ovechkin as Alexander the Great. In it, the writer states,

Alexander of Macedonia (a.k.a. Alexander the Great) was a Greek leader who ruled a vast empire– including Russia– in the fourth century BCE. He’s been a hero in Russian culture ever since. (I may or may not have read the entire Wikipedia article last night.)

In fact, Alexander never conquered Russia. He could not have done so as it did not exist until the ninth century A.D.

Neither did Alexander conquer what became Russian territory. The closest he came to doing so was when he conquered Sogdia. It’s lands are now part of  Uzbekistan and Tajikistan, which were both part of the Soviet Union.

I can’t speak to how well Alexander is liked in Russia today – though I am delighted to read that he is well regarded – but as there is no reference to the country in  the Wikipedia article on Alexander, if the writer did indeed read it, he might have done so a little too quickly; maybe he reads at the same fast pace as ice hockey is played.

The two maps that accompany this post show how Herodotus and the Greeks in the fifth century B.C. and Strabo, along with the Greeks and Romans in the first century A.D., understood the world to look. As can be seen, the land that would one day become the state of Russia did not figure on their horizon. 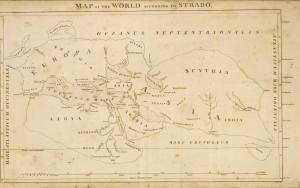 The world as Strabo knew it.

While we are on the subject of Russia, it has been reported that Irbis, a Cossack group, is making a bronze bust of Russian President to honour his achievements as President.

Andrey Polyakov, leader of Irbis, is quoted in The Independent as saying that “This is the man who brought order and to stop wars in the Caucasus, South Ossetia, Abkhazia, Transnistria…”.

The bust (below) may be inspired by those of Roman Emperors but there is definitely a touch of Alexander in Putin’s faraway gaze. As for Polyakov’s words, they reminded me of what Curtius said about Tyre.

After experiencing many disasters and rising again after its destruction, now at last, with long peace completely restoring its prosperity, Tyre enjoys tranquility under the merciful protection of Rome.
(Curtius IV.4.21) 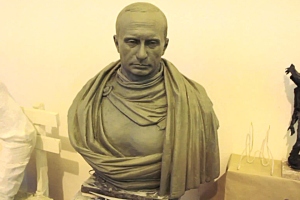 Categories: Of The Moment, On Alexander | Leave a comment