I chose representations of him from the Fourth Century B.C. to the First A.D.

Fourth Century B.C.
As you can see, it is a bust of Alexander in profile. I chose it for three reasons.

Firstly, the view is in profile. Most pictures of Alexander are done face or side-on so the look in profile immediately made the picture stand out.

Secondly, the fact that the bust has been so firmly sliced (or was it meant to be like that?) down the back gives the image a very vulnerable appearance. One minute Alexander is there; the next, gone.

Thirdly, I really like the way the sculptor has him looking upwards – staring into the distance, wondering what is out there, how he might find it (and, perhaps, how he might conquer it). That’s Alexander – always looking to what lies just beyond. 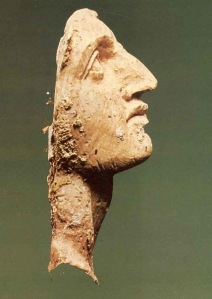 Third Century B.C.
This next picture is a personal favourite of mine, as it shows Alexander looking very heroic, and, I have to say, lush, too. However, do you see the line along the bottom of his neck? I am wondering if the body originally belonged to someone else and Alexander’s head was placed on it. Also, notice the object that he is holding in his left hand. I can never look at this photograph without wondering what that is. 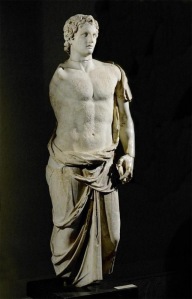 Second Century B.C.
Two centuries after his death, Alexander still retains his leonine (or just plain shaggy) head of hair, tilting head and liquid looking-into-the-beyond gaze. This head also seems to represent Alexander as a young man as it has a freshness and vitality to it that he surely did not possess in his later years. 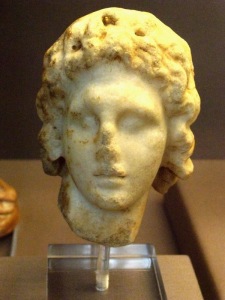 We move on either to the First Century B.C. or First Century A.D. and a mosaic that was found in Pompeii. Does it deserve its place on this list? The man on the left is said to be Alexander but I don’t think we know for sure. The woman on the right might be Stateira II or Roxane.

As for Alexander, he looks very tanned here. I don’t know if the artist intended to show him that way, but it certainly seems a more realistic representation than the reconstruction of his skin colour, below. By contrast, Stateira II/Roxane has very pale skin – perhaps meeting a Roman ideal of how women’s skin should look? 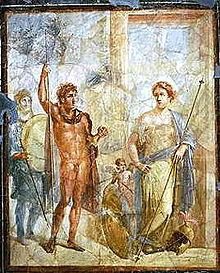 Added Extras
The Alexander Sarcophagus never belonged to Alexander. It was once thought to have held the body of Abdalonymus, the gardener-made-king but according to Wikipedia, that has been disproved.

Whoever the sarcophagus was meant for, it is an expertly sculpted coffin. Below, you can see a picture of a Macedonian cavalryman, identified as Perdiccas. Amazingly, after 2,300 years some of the original colour still remains… 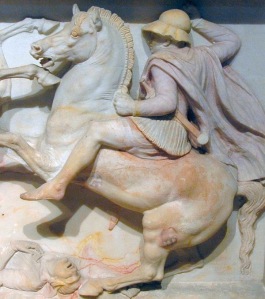 … and it no doubt inspired the reconstruction of Alexander’s colour scheme (You can tell it is him by his lion-helmet).

Alexander here is surely much too pale skinned for someone who spent a great deal of his life outdoors but what about the colour of his clothing? Whether it is realistic or not, it is certainly very striking (and let’s not even talk about the Persian soldier’s trousers).

I suppose the purpose of the reconstruction is to bring us closer to Alexander. I have to admit, though, I find him more in the more idealistic portrayals. Perhaps I am more interested in the heroic Alexander rather than the realistic one. But if the real Alexander is in both, I’m sure that doesn’t matter. 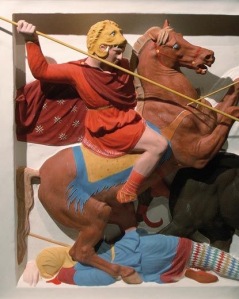 5 thoughts on “Images of Alexander”