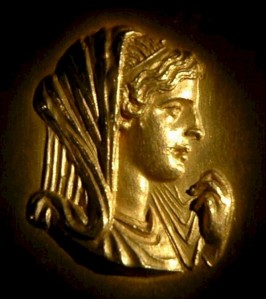 Yesterday was Mothering Sunday in the UK so let’s remember one of the most important mothers of antiquity. A descendent of Achilles, she was born Polyxena. Circa 357 BC she changed her name to Myrtale and then in 356 BC she took the name by which we know her: Olympias. In the same year, her son Alexander the Great was born. Following his death, she took the name Stratonice.

The historical record has not been kind to Olympias. Plutarch sums it up in his Life of Alexander (9) where he calls her ‘a woman of a jealous and vindictive temper’.

There is no doubt that Olympias was a tough lady but then, if she wanted to be a serious force in Macedonian politics and not just a pawn to be moved about by others, she needed to be.

On occasion, she may well have gone too far in her actions – we think of the murder of Cleopatra (and possibly her daughter) here (Plutarch 10) – but she lived for her son and must have loved him very, very deeply, indeed.

If we are unconvinced by this, it is only because that love was tainted by an inherently violent political system. In the unstable, Win or Die, world of Fourth Century BC Macedonian politics, however, Olympias had no choice but to fight for Alexander’s right to be king, and defend him once he became king. To step back from that would be to expose herself to attack.

If Olympias is anything, she is a tragic figure rather than an evil one. Most of all, though, she is proof of the intensity of a mother’s love.

Categories: Of The Moment | Tags: Olympias | Leave a comment