Boning Up On Bactria 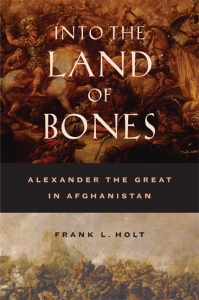 Into the Land of Bones is a brief – 165 page – account of the Bactria-Sogdia phase of Alexander’s expedition. The Macedonian king entered Bactria in the spring of 329 BC in pursuit of Bessos, murderer of Darius III and pretender to Alexander’s Persian throne. Bessos was captured soon after. At that point, all was well. Bactria had offered no resistance to the Macedonians and a quick departure to India must have seemed probable.

However, it was not to be. Sogdia and Bactria rose up in revolt. Their rebellion was lead by a Persian nobleman named Spitamenes who, for the next year would lead a semi-guerrilla campaign against the Macedonians. His part in the rebellion ended in the autumn of 328 when he was murdered by his own men. Before then, however, Spitamenes would score some impressive victories against Alexander’s army. After he died, the revolt continued for nearly another year.

The Sogdian-Bactrian campaign brought out the best and worst in Alexander. It forced him to adapt his military tactics, which he did, to ultimate success; but it also lead him to take a bloody revenge against the native people far beyond anything that was proportionate or necessary.

Alexander finally left Bactria and Sogdia in the summer of 327 BC. Officially, he had pacified both countries. Unofficially they were tinder boxes waiting to explode, which – even in Alexander’s lifetime – they did.

Frank L. Holt’s book is very readable. I finished it in just over a week. Had I dedicated my spare time to it I could have read half that time easily.

In his Preface, Holt says he wrote the book with both ‘professional historians and the general public’ in mind. In my view, Land of Bones offers more to the latter as Holt does not dive deeply into Alexander’s actions; instead, he is content to simply describe what happened and give his thoughts as he does so.

The book ‘grew out of a public lecture’ that Holt gave not long after the 11th September attacks in 2001 and throughout the book he compares and contrasts what happened to Alexander with what happened to the British army during its Afghan campaigns in the late 1830s, to the Soviet Union when it invaded Afghanistan in the 1980s, and the USA and her coalition partners when they did the same in 2003.

(By way of clarification – Afghanistan now encompasses the ancient countries of Bactria and Sogdia, hence the connection. Actually, Sogdia also lies in three other countries – Turkmenistan, Uzbekistan and Tadjikistan – but as they are politically stable we do not hear much of them in the book).

For me, Holt never really nails the comparisons down. Indeed, in the Preface he admits that history ‘never repeats itself’ directly. As a result, Britain, the USSR and Coalition all come and go in rather an ethereal fashion. It felt to me like he was using the experiences of these modern invaders as hooks to gain the interest of his publisher. I hope and trust that this is a misreading.

In my opinion, Into the Land of Bones does not contain any outstanding revelations. Only one statement in it has made a lasting impression on me, and that is a citation from another book. Early on, Holt states that every day Alexander had to find ‘the equivalent of 255 tons of food and forage, plus 160,000 gallons of water, just to keep his army alive and moving forward’. This fact comes from Donald W. Engel’s Alexander the Great and the Logistics of the Macedonian Army (For more on this point, see my post here).

I’d like to conclude with something I really liked about the book and a couple of things that I didn’t. I’ll start with the latter so that I can end on a positive note.

Disliked
Firstly, I really did not care for the way that Holt consistently (especially at the beginning) referred to the ‘Greeks and Macedonians’ as if either the Greeks lead the invasion or even that the two were equal in it. They did not, they were not. This was a Macedonian led invasion. If you want to be charitable, you could call it a coalition army, but only at the expense of accuracy. It was a Macedonian army with foreigners – Greeks and others – attached.

To be sure, Holt is not the only historian who gives the Greeks an importance in Alexander’s army that they did not have – in fact, I think most if not all historians do it – but they really ought not to. To be fair, you could argue that the Macedonians were in a sense Greek in that they came to Macedonia from there but by Alexander’s day they were almost entirely sundered from the Greeks; they hated them, and the Greeks themselves did not even think of the Macedonians as one of them. At the least, I wish Holt, and all historians, would talk about the Macedonian led invasion rather than imply that it was something other.

Secondly, the price of the book. It’s publisher, the University of California Press is currently selling Into the Land of Bones for £52.95 (here). This is an absolute disgrace. Which member of the general public will pay that much for a slender volume like this? I enjoyed Land of Bones and am very grateful to the person who gave me a copy of it because even I would not pay that much. And if I would not then someone who has only a part time interest in Alexander never will. If universities insist on charging such ridiculous prices for their books I really don’t know why they bother to publish them in the first place. I am sure they have their reasons, but really, there’s no point. No one will buy them. NO ONE.

If anyone knows how many copies of Into the Land of Bones have been sold – especially if it is a lot – I would love to know it and be proved wrong.

Liked
Well, you have seen me come as close to losing my temper in a blog post as ever I have, so let’s finish with my plus point. There are two. Firstly, I appreciated the way in which the book refreshed my memory of this part of Alexander’s expedition. Secondly, and most of all, I really, really appreciated the final chapters which covered what happened in Bactria-Sogdia in the centuries after Alexander waged war there. They are not happy chapters but they are fascinating ones, especially when Holt talks about the discoveries of archaeological expeditions. Once upon a time we knew of about seven Bactrian kings. Thanks to locals and archaeologists discovering coin hoards, however, that figure has risen, and risen, and risen.

To conclude, would I recommend Into the Land of Bones? Yes, I would, but I would have to say, borrow it from a friend or the library as the retail prices are wholly unreasonable.

Categories: Historians of Alexander | Tags: Frank L. Holt, Into The Land of Bones | Leave a comment