Let’s start today’s update post with the question (no doubt inspired by Oliver Stone’s Alexander) that brought someone to The Second Achilles: Did Olympias and Alexander ever have sex? Answer: No, they didn’t.

This is not to say, however, that Olympias had no interest in her son’s sexual development. There is a story (referred to by Peter Green in the Alexander the Great, Relationship with Hephaestion video embedded in this post) that when Alexander was growing up, Olympias and Philip II were so concerned by their son’s lack of interest in sex that they hired a courtesan named Callixeina to sleep with him. At first, Alexander showed no interested in her and his mother had to continuously beg him to sleep with her.

This anecdote comes from Athenaeus’ Deipnosophistae X.435 (here) Is it true? I don’t know. Alexander had no problem forming sexual relationships later on (e.g. with Roxane and Bagoas and probably others of both sexes) but when I read about him, I never get the impression that sex was high on his agenda so I would put Athenaeus’ story in the ‘perhaps’ category.

I have finally finished Alexander the Great’s Art of Strategy by Partha Bose. 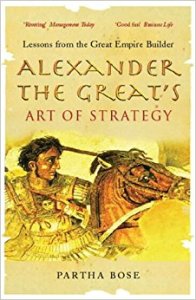 I read nearly 100 pages yesterday to bring the book to a close. My final opinion of it is that it is a consistently interesting read – I never stopped enjoying how Bose relates the events of Alexander’s life to contemporary businesses. Unfortunately, it is also a consistently unreliable history of the Macedonian king. Bose’s bibliography is seven pages long. He may have read all those books but he has not read them very well. If you are interested in a history of Alexander I cannot recommend this book to you. If you are a manager looking to be inspired, however, Alexander the Great’s Art of Strategy maybe of use to you. Be mindful, however, that it’s foundations can be a little shaky (though see below).

Three passages from my reading have stuck with me. The first comes from the start of ‘Chapter 8 ‘Teeth Versus Tail’ – Logistics Strategy’.

I really like the word choice here. Talk implies an endless conversation which can sum up amateurs very well. Discuss, on the other hand, has a more definitive feel about it – we discuss in order to reach a decision, which we then act upon.

I was very critical of Bose’s accuracy, above, but let me give him credit for getting one thing right that many, many other writers get wrong. Namely, that,

… Alexander was the last person to successfully conquer Afghanistan…
(p.203)

YES. How many times have I read articles that claim that Alexander, like Britain, the USSR, America etc failed to conquer Afghanistan? No, he conquered it (or rather, its predecessor countries) alright. What he didn’t do was settle the region properly. He won the war and, if you like, lost the peace. Unfortunately, Bose opens the above passage by saying ‘It is generally believed…’. As you may surmise, in my experience it is certainly not generally believed but I’ve given Bose a hard enough time already so we’ll let that go.

Finally, after discussing the Macedonian army’s refusal at the Hyphasis river to march any further east, Bose states that Alexander,

… went into his tent and pouted for three days. After that he came out and agreed to head home, but not before making a General MacArthur-like promise about returning some day.
(p.233)

This is the second time I have heard the claim that Alexander intended to return to India (See my comments underneath the What if Alexander the Great had lived? video embedded in this post) and I am still ignorant of its veracity. I shall look up the sources’ accounts of the Hyphasis ‘mutiny’ to see if I missed it and report back.

So, that’s Partha Bose. I have already started my next book – James Romm’s Ghost on the Throne.

2 thoughts on “What Started With Callixeina?”