The Story
Alexander entered ‘the country of the Oreitae (Oreitis?). Diodorus has more to say about Oreitaean customs than he does about Alexander’s campaign against that people. This is partly because fighting the Oreitae proved easy, and the country was ‘quickly brought… into submission’, and partly because the specific custom to which he refers was such an unusual one.

Diodorus describes how the Oreitae leave the naked bodies of their dead in thickets apparently so that wild animals can eat them. The relatives of the deceased then divide up the dead person’s clothing between themselves, ‘sacrifice to the heroes of the nether world,’ and host ‘a banquet for their friends’.

From Oreitae, Alexander made his way to Cedrosia. There, he travelled close to the shore line.

Diodorus doesn’t tell of any military action taking place in Cedrosia, although if the Macedonians found the going easy in the country of the Oreitae they would not have been troubled by the Cedrosians.

The people, Diodorus says, were ‘unfriendly and utterly brutish’.

This savagery seems to pertain to their personal habits rather than what they were like as warriors. For, with admittedly no small amount of hyperbole, Diodorus says that the Cedrosians let their nails ‘grow from birth to old age’ and that they never washed their hair. He adds that they were heavily tanned and dressed ‘in the skin of beasts’ – as stereotypical a sign that someone is a savage as ever there was.

The Cedrosians may have been very primitive but they knew how to make the best of their limited resources. They not only wore animal skins, but ate ‘the flesh of stranded whales’, which had died on their beaches. Furthermore, they used whale bones to build their homes. This went as far as using whale scales as roof tiles. A very clever feat, of course, since – as the Footnotes point out – whales do not have scales.

Alexander made his way through Cedrosia ‘with difficulty’. Not because of the people, but because he was short of supplies and was now marching through a desert.

The going proved so hard that the army became ‘disheartened’ and Alexander himself ‘sank into no ordinary grief and anxiety’.

The king sent messengers to Parthyaea, Dranginê, and Areia to seek supplies. The messengers delivered their orders and provisions were forwarded on. They did not, however, arrive in time to prevent the loss of many soldiers. They never could have.

These losses were brought about not only by the dreadful conditions and Alexander’s bad planning, but because the Oreitae launched what must have been a surprise attack on Leonnatus’ division, inflicting ‘severe losses’ before escaping home.

Comments
Diodorus calls the Oreitae habit of exposing the bodies of the dead to be eaten by wild animals ‘strange and quite unbelievable’. Certainly to our eyes it is most unusual. If I was the Oreitaeans’ PR man I’d point out (a) the decomposing body is kept away from the community so one cannot oppose it on hygiene grounds, and (b) by being eaten it both highlights and makes a practical contribution to the well-being of the environment. What’s the difference between being eaten by a worm and wolf, anyway?

I’m afraid I would find it harder to be the Cedrosians PR agent. Overgrowing finger and toe nails, unwashed hair, skin ‘burned black’ by the sun. And how they must have smelled of whale! Yuk. Well, if anyone can defend the Cedrosians I’d love to see it.

I was very interested by Diodorus’ statement that Alexander ‘sank into no ordinary grief and anxiety’. I read this as Diodorus saying that he became depressed.

Alexander was, it seems, prone to anxiety. A quick google search for references on this blog to him being anxious shows that he suffered from anxiety on at least two occasions.

(i) Diodorus Ch. 31 Over Memnon’s success in the Aegaean – read here
(ii) Plutarch 47 In Hyrcania when he worried over whether his army would continue to follow him – read here.

I have to say, though, neither of these occasions are presented in such a way as to make me feel Alexander suffered from anxiety as a serious mental health disorder. On both occasions he was anxious in the way someone would be in a high pressure situation.

In other words, he was anxious, the moment passed and he moved on.

By contrast, what Diodorus describes feels really quite different. It foreshadows, in a way, the extreme emotion that Alexander will feel when Hephaestion dies (and which Diodorus explains in two simple but foreboding words.  Alexander, he says, ‘intensely grieved’ [Chp. 110] for his friend. Arrian goes into greater detail about how he grieved [Bk 7. Para 14]).

I’m used to reading that Alexander became a megalomaniac in his later days – do we have any justification of suspecting that all along he was prone to anxiety attacks, which in Gedrosia developed into a more serious – even if not clinical – depression? I need to improve my medical knowledge before attempting to answer that question.

Keen to outdo the Cedrosians’ love of all things
whale, Alexander decides to go looking for whales
in their natural habitat. 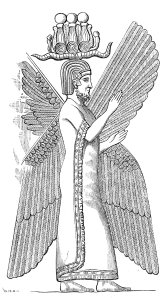