The Story
Chapter 111
As Hephaestion’s cortege makes its solemn journey to Babylon, Diodorus returns to Greece to describe the origin of the Lamian War.

The Lamian War (323 – 322 B.C.) was the first major battle to take place after Alexander’s death in June 323. It pitted Antipater and Craterus against a joint Aetolian-Athenian army. If you would like to know more about the battle itself, I wrote about it in my read-through of Robin Waterfield’s excellent book Dividing the Spoils here.

For Diodorus the origin of the Lamian War lies in the ‘disturbances and revolutionary movements’ that were taking place across Greece around this time.

These, he says, were caused by the unemployed mercenaries and rogue satraps and military officials who, after being sacked on Alexander’s orders, or having absconded from their governorships, had congregated in Taenarum and formed an army under an Athenian general named Leosthenes to oppose the Macedonian king.

Leosthenes carried out secret negotiations with Athens and gained its support to the tune of 50 talents ‘and a stock of weapons’. He also sought an alliance with Aetolia. The next step would be war.

As Leosthenes made his preparations in Greece, Alexander launched a winter campaign against the Cossaean tribe in Media. The Cossaeans were a mountain people who were ‘outstanding in valour’. That, and ‘the ruggedness of their country’ meant that they had never been conquered by the Persians.

But that record was about to come to an end. While the Cossaeans were still ignorant of the threat approaching, Alexander took control of all the roads into their country. He then launched a lightning strike against the people. Diodorus says that he ‘was superior in every engagement’. Many Cossaeans were killed and many more captured.

The Cossaean campaign took around forty days to complete. The survivors swore fealty to Alexander, and he ‘founded strong cities at strategic points and rested his army’.

Another lacuna in the manuscript appears at this point. As the beginning of the next chapter shows, however, we don’t appear to miss too much.

Chapter 112
Once his army was ready, Alexander began his march to Babylon. He walked slowly, stopping regularly. I can’t remember him doing this before. Was he trying to delay his arrival – and Hephaestion’s funeral – for as long as possible?

Diodorus says that Alexander ‘was still three hundred furlongs’ away from Babylon when Chaldaean astrologers there appointed one of their number – ‘the eldest and most experienced’ of them – to warn the king that if he entered the city, he would die. They had seen his death in ‘the configuration of the stars’. His life could be saved, however, ‘if he re-erected the tomb of Belus [Bel]’ but on no account should he enter Babylon.

Diodorus names the Chaldaean envoy as Belephantes. Either out of humility or nerves, Belephantes did not seek Alexander himself out but delivered the warning to Nearchus. He, in turn, spoke to the king.

Alexander, understandably, ‘was alarmed and more and more disturbed’ by the astrologers’ warnings. Nevertheless, it was only after ‘some hesitation’ – that he passed Babylon by (?) and set up camp two hundred furlongs away.

Alexander’s actions did not meet with Greek approval. Amongst those who tried to talk him about of his self-imposed exile was the philosopher Anaxarchus. They ‘plied [the king] with arguments drawn from philosophy’ and were so successful that not only did Alexander decide to enter Babylon after all but came to hate the all ‘prophetic arts’, especially the Chaldaeans’.

One can only imagine what the Chaldaeans thought as they watched Alexander ride towards the royal palace. The population, however, were very happy at the return of the king. They received the Macedonian troops ‘hospitably’. Woes were forgotten and ‘all turned their attention to relaxation and pleasure’.

Comments
Citing Plutarch, the Footnotes state that Alexander’s Cossaean campaign ‘was intended to solace Alexander’s grief for the death of Hephaestion’. To us, this seems very odd. In a warrior culture, however, it would have made perfect sense.

The story of the Chaldaeans forecasting Alexander’s death is a very intriguing one.

On the one hand, it has every appearance of a tale inserted into a narrative after the event in order to give meaning to it.

On the other, even if one doesn’t believe that it is possible to tell the future using astrology, maybe the story did happen just not in the way that it is presented. In other words, the priests got lucky. Astrology doesn’t work, but by pure coincidence, the stars arranged themselves in such a way as to fit the Chaldaeans’ criteria for the death of a monarch. 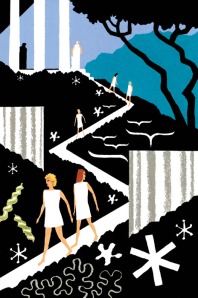