* The Landmark Arrian Ed. James Romm (Pantheon Books 2010)
** Green Alexander of Macedon 356 – 323 B.C. A Historical Biography (University of California Press 1991)
*** Wood In the Footsteps Of Alexander the Great A Journey from Greece to India (BBC Books 2004)

Torture in Arrian and Plutarch

Part 2 Torture in Curtius (I)

This week, the American Senate published a report into the use of torture by the CIA following the 11th September attacks in 2001. You can read about it at The Daily Telegraph here.

The report got me thinking about how often torture is mentioned by the Alexander historians and in what context. As I have Arrian’s, Curtius’ and Plutarch’s books in e-book format I typed ‘torture’ in to the search field to see what came back. Here is what I found.

Arrian
Arrian only mentions torture twice, and both times in connection with the same incident (in VI.30). In the winter of 325 B.C., Alexander reached Pasargadae, on his way back to Babylon from the Hyphasis River. There, he stopped to visit the tomb of Cyrus the Great. 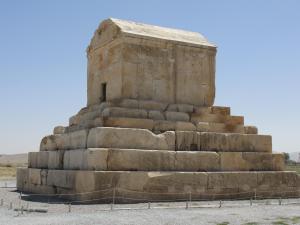 Much to his distress, Alexander found that the tomb had been ‘broken into and robbed’. Aristobulos was given orders to restore it.

The desecration of the tomb was all the more vexing for Alexander as it was supposed to be under permanent guard by the Magi. Alexander

… had the Magi who guarded the monument arrested and put to the torture, hoping to extort from them the names of the culprits; but even under torture they were silent, neither confessing their own guilt nor accusing anybody else.

In consequence of this, Alexander was obliged to release the prisoner.

What comes out most strongly when reading this passage is the matter-of-factness of it all. Alexander suspected the guard of wrong-doing, had him arrested and tortured, then released him. End of story.

For his part, Arrian makes no judgement regarding whether he thinks the torture justified or not*. Given that he is not afraid to criticise Alexander on other occasions when he thinks him in the wrong I take Arrian’s silence to be acceptance of what happened. It’s possible he doesn’t care to make a comment but would that be his style?

Plutarch
The word ‘torture’ appears three times in Plutarch’s Life of Alexander, and in connection with two separate incidents – the Philotas Affair and Pages’ Plot.

… Philotas’ enemies brought innumerable accusations against him. He was arrested, interrogated and tortured in the presence of the king’s companions, while Alexander himself listened to the examination from behind a curtain.

Plutarch spends hardly any more time on what happened to Philotas than Arrian did on the Magus but does reveal something of Philotas’ suffering and who at least one of the companions mentioned above was. As he hid behind the curtain, Alexander

This is the reality of torture that Arrian omits. For his part, Alexander is unmoved. In fact, Plutarch has him criticise his old friend.

… [Alexander] exclaimed, ‘Ah, Philotas, if you are so weak and unmanly as this, how could you involve yourself in such a dangerous business?’

I suppose from Alexander’s point-of-view it is a fair question. Whether or not Philotas was really guilty, though, is entirely another matter. That, however, is an issue for another post. To go back to Chapter 49, Plutarch notes that Philotas’ execution and his father, Parmenion’s murder, by Alexander caused the king to become ‘dreaded by many of his friends, above all by Antipater’.

The viceroy had particular reason to worry – not so much because of Parmenion’s and Philotas’ death – but because Alexander also took this opportunity to finally execute Alexander Lyncestis, whom he had held under arrest for the last three years on suspicion of treachery.

This Alexander was Antipater’s son-in-law and had been arrested in Asia Minor but I think Alexander did not want to risk executing him there in case doing so caused a confrontation with Antipater. Now, the viceroy approached the city of Aetolia to make an alliance with them.

Chapter 55
Plutarch does not tell the full story of the Pages’ Plot. As Curtius does, and we’ll come to him in the next post, I won’t go into the details here. In Plutarch’s version, it appears that after the Pages’ conspiracy was discovered Alexander’s agents learnt that (its leader) Hermolaus had asked the court historian, Callisthenes, ‘how he might become the most famous of men’ to which Callisthenes had replied ‘By killing the most famous of men’.

Callsithenes spoke most unwisely. He may have been Alexander’s historian but was not liked in the court. He was proud and vain. This had lead him to refuse to do obsequience to the king when he had demanded it*. That in turn gave his enemies the opportunity to slander him.

If Callisthenes had gone no further with Hermolaus perhaps he might have got away with his loose tongue. Instead, Plutarch says that Callisthenes encouraged Hermolaus to assassinate the king. This, too, came to the agents’ attention.

The conspirators were tortured to see if more evidence against Callisthenes could be uncovered. However,

… not one of Hermolaus’ accomplices, even under the stress of torture, denounced Callisthenes. Indeed, Alexander himself, in the letters which he immediately wrote to Craterus, Attalus and Alcetas, says that the youths had confessed under torture that the conspiracy was entirely their own and that nobody else knew of it.

This was not enough to save Callisthenes’ life. The conspirators were executed and Callisthenes arrested. His eventual fate depends on who you read but the different accounts all end one way – with his death. For the record, Plutarch doesn’t say that he was tortured.

As for the Pages, though, Plutarch gives no further details regarding their torture.

* This was especially damaging as he had apparently promised Hephaestion of all people that he would bow to the king. If this is true, he had made Alexander’s best friend look stupid in front of Alexander – an intolerable insult

So, there we are, and I have to say that I was quite surprised by the scarcity of references to torture in Arrian and Plutarch.

Luckily for me, although that is probably not the right word to use, I know that the word crops up quite a few times in Curtius. Well, he is supposed to be interested in the lurid side of Alexander’s life.

Another surprise was that Arrian does not mention it with reference to Philotas at all. Philotas’ supposed treachery is mentioned but Ptolemy – Arrian’s named source for the story – says that Parmenion’s son was put on trial, accused with ‘irrefutable proofs’, and then shot. I wonder if he glossed over what happened out of embarrassment over Philotas’ and Parmenion’s treatment.