Of Lions and Men

It occurred to me the other day that images of Alexander most often show him in the guise of Heracles. Think of all those coins, for example, where he is wearing the same lion-cap that the mythical hero wore. Why is this, I wondered, when he drew his real inspiration from Achilles? 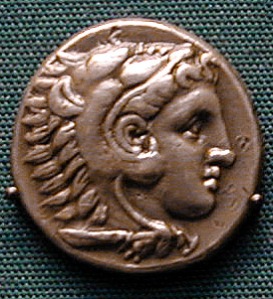 The answer to this is perfectly obvious, which is probably why I missed it: Heracles was Alexander’s paternal ancestor, the god from whom the Argead dynasty claimed descent. Alexander may have liked Achilles more but for propaganda purposes he had to focus on Heracles. I am very grateful to my friend Jen for helping me see this.

This morning, another question occurred to me – did Alexander really wear a lion shaped helmet? One, that is, like Colin Farrell wears in Oliver Stone’s Alexander, 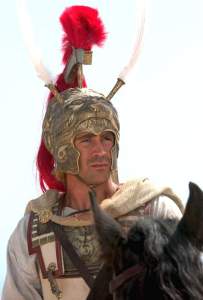 Well, he is certainly portrayed wearing one on the Alexander sarcophagus, 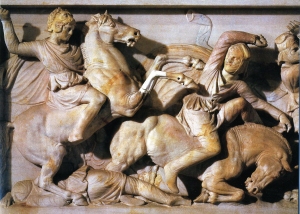 In his biography of Alexander, Robin Lane Fox notes the sarcophagus image and says ‘no doubt Alexander wore it in real life’. This wording suggests to me that we don’t know for sure that he did but (at least in RLF’s opinion) it is very likely.

One final question: What exactly is Alexander’s relationship to Achilles? I don’t mean in terms of his family, but rather, did he really see himself as a second or new Achilles or is that the invention of the ancient historians? Well, I don’t know for sure – none of us do – but as I write these words I feel that even if details were made up later on, if Olympias – Alexander’s mother and descendent of Achilles – had any influence on her son, she would have imbued him with a knowledge of, love for, and desire to emulate/beat the great hero of the Trojan War.