This afternoon, I had lunch and a beer in the Marquis of Cornwallis pub in Bloomsbury. While I was eating I looked up and happened to see a framed picture of The London Illustrated News with a coin bearing Alexander’s image on it. What an unusual sight! And a very pleasant surprise. Here it is:

Apologies for the interruption of myself in the glass. You can tell the head is Alexander’s on account of its leonine hair but most especially the ram’s horns, which indicate Alexander’s connection (i.e. sonship) to the Egyptian god, Ammon. 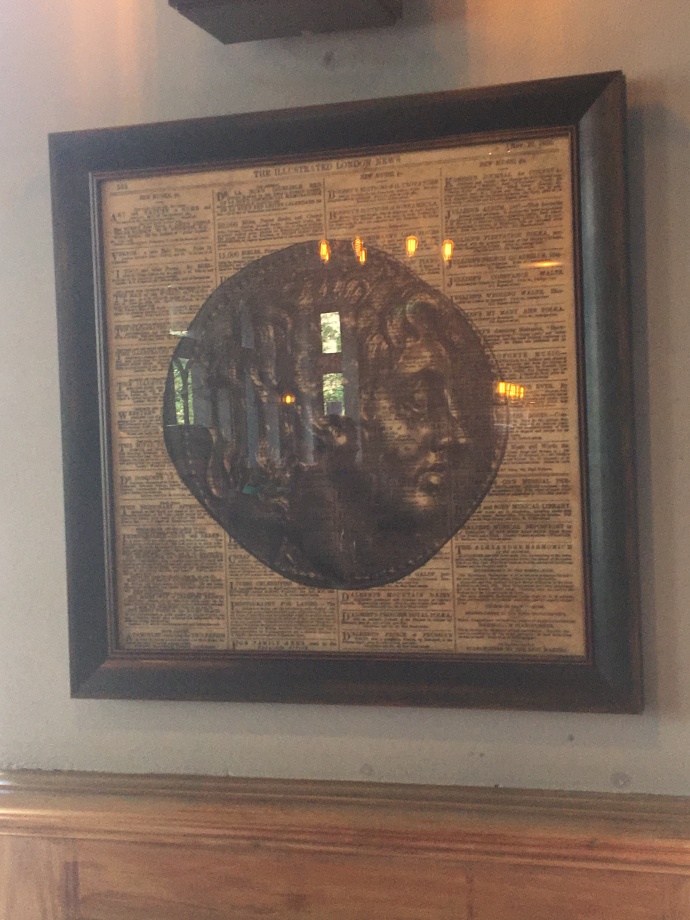 The picture was a surprise for me but not the pub. On the way to the toilet I saw a portrait of some eighteenth century soldiers sighting… with light sabres. The owner clearly has a taste for mixing the old and new.

This week, the World Cup continues apace in Russia. Obviously being English, I am supporting England; however, as I drew France in our office sweepstakes, the mercenary in me would like them to win so that I would be quids in. Are there any teams from Alexander’s world taking part? As a matter of fact, yes, there are, though only two: Egypt and Iran.

Unfortunately, Egypt have lost their first two games and so will make no further progress in the tournament. I saw some of their game against Russia last night and was entertained by the pharaonic head dress that some of the fans were wearing. It’s nice that they remember the past even if it is only for entertainment value. Who knows, though, perhaps they discussed the pharaonic dynasties afterwards?

As I write this blog post, Iran – Persia – is playing Spain and acquitting herself very well. The first half is coming to an end and the score is still 0-0.

Of the other countries playing, only Saudi Arabia comes close to having an Alexander connection: at the time of his death in June 323, of course, he was about to invade it. During the siege of Tyre in 332 BC, Alexander did actually launch a few sorties into Arabia.

I am currently reading Ghost on the Throne by James Romm – his account of The Wars of the Successors. I have been reading this book on and off for months. I don’t know why it has taken me so long as it is a good book. Mea culpa: laziness on my part along with a great ability to be distracted by other books is most likely to blame. Anyway, I am coming towards the end now and overall my impression of the book is a very positive one – except, that is, for one thing: Romm’s tiresome habit of calling Antipater ‘old man Antipater’. Thank goodness we have passed 319 BC and Antipater has died but up till that point it was rather annoying me. Antipater was more than just his age; I don’t know why Romm had to alert us to it in a not very complimentary way very other time he mentioned him.